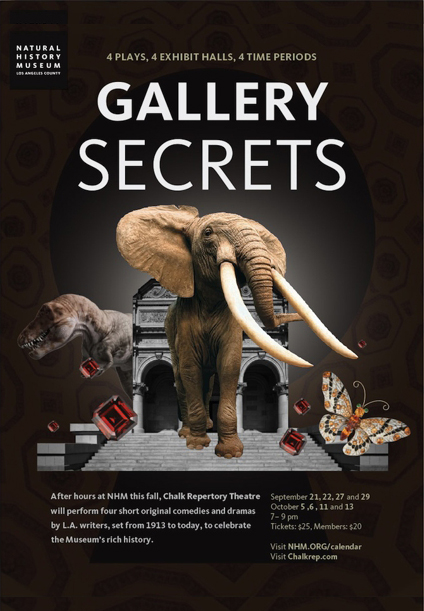 Each play is inspired by an assigned gallery in the museum and set in the time period when that gallery was built, uncovering 100 years of history, architecture and exhibits. Audience members will be divided into four groups and will be guided through the four galleries to see each play, ending the evening with cocktails in the main foyer.

GALLERY SECRETS is performed after hours at the Natural History Museum of Los Angeles County, presented by Chalk Repertory Theatre.

In the 1913 Rotunda – A VAST HOARD by Tom Jacobson

On the eve of the museum’s opening, civic leader Harris Newmark attempts to take back the portraits of himself and his wife that he has donated to the museum’s director.

Marie struggles to understand why her husband, a retired Colonel, has taken such an interest in collecting specimens of Gems and Minerals.

In the present day Dinosaur Hall – PROM SEASON by Boni B. Alvarez

It’s Prom Night at the Natural History Museum, and a teenager and her boyfriend slip away to have sex, only to be discovered by a security guard who has seen this all before.

Chalk Repertory Theatre is dedicated to presenting classical and contemporary plays in unconventional spaces around Los Angeles County and most recently presented the world premiere of MOMMUNE by Dorothy Fortenberry and Lady Windermere’s Fan by Oscar Wilde at the William Andrews Clark Memorial Library.For more information about Chalk Rep, visit the theatre online at www.chalkrep.com or call 323-379-9583.