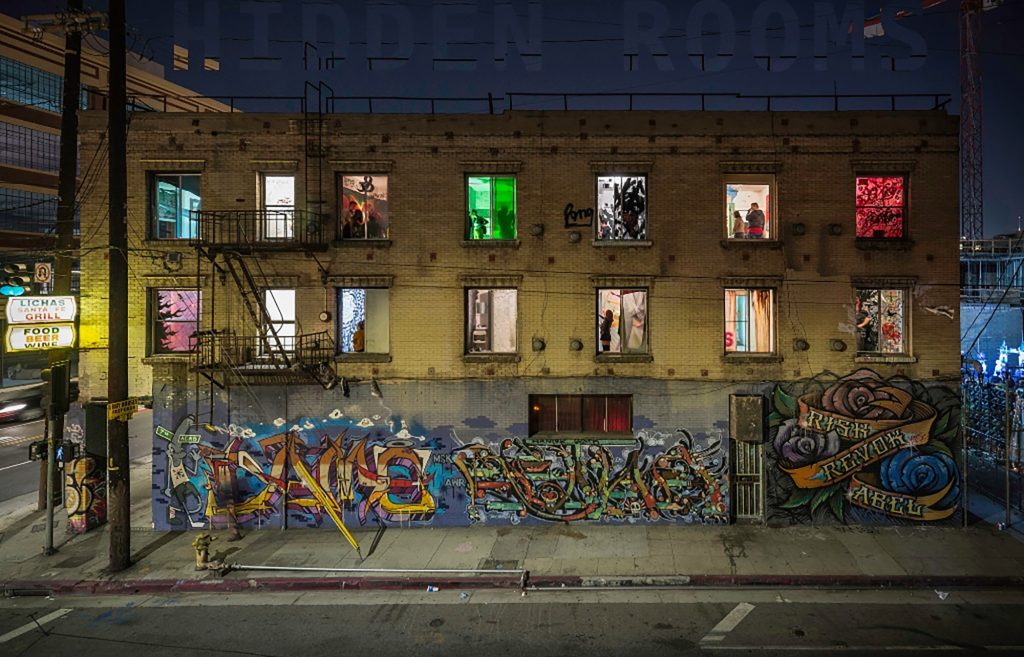 “Art at the Rendon // Stories” is an immersive, operatic experience that turns the hotel itself into a stage and screen as it explores a fictionalized version of the building’s past. On the exterior, projection-mapped short films will allow visitors to see into the building’s windows, offering glimpses into the lives of The Rendon’s residents. Ralph Ziman, an artist, filmmaker, and the hotel’s owner, is leading the project. He says, “I’ve never seen projection mapping done in this way. I think having a very strong human element in it just makes it really relatable and interesting and gives it a lot of depth.”

More than 80 artists transformed The Rendon, a vacant hotel in the Downtown Los Angeles Arts District, into a series of art installations. Ticketholders will be invited to move freely through two floors of the hotel, entering individual rooms where actors will present different slices of life. Opera singer Rachel Staples Guettler will perform live at the event.

Downstairs, the hotel’s corner dive bar, Licha’s Bar and Grill, will be reimagined as a 1920s speakeasy with libations by Angel City Brewery, Infuse Spirits and Pali Wine. There will also be live music by The Vignes Rooftop Revival. All are based in the Arts District.

While STORIES focuses on The Rendon’s history, the event’s creative elements hint at the building’s future. Ziman says, “The idea of it is that over time, The Rendon will represent art, music, acting, theater… different layers of culture. A little bit of everything. We don’t want to repeat ourselves, we want to keep exploring.”

Art at the Rendon: HIDDEN ROOMS event-curated and produced by Cartwheel Art.